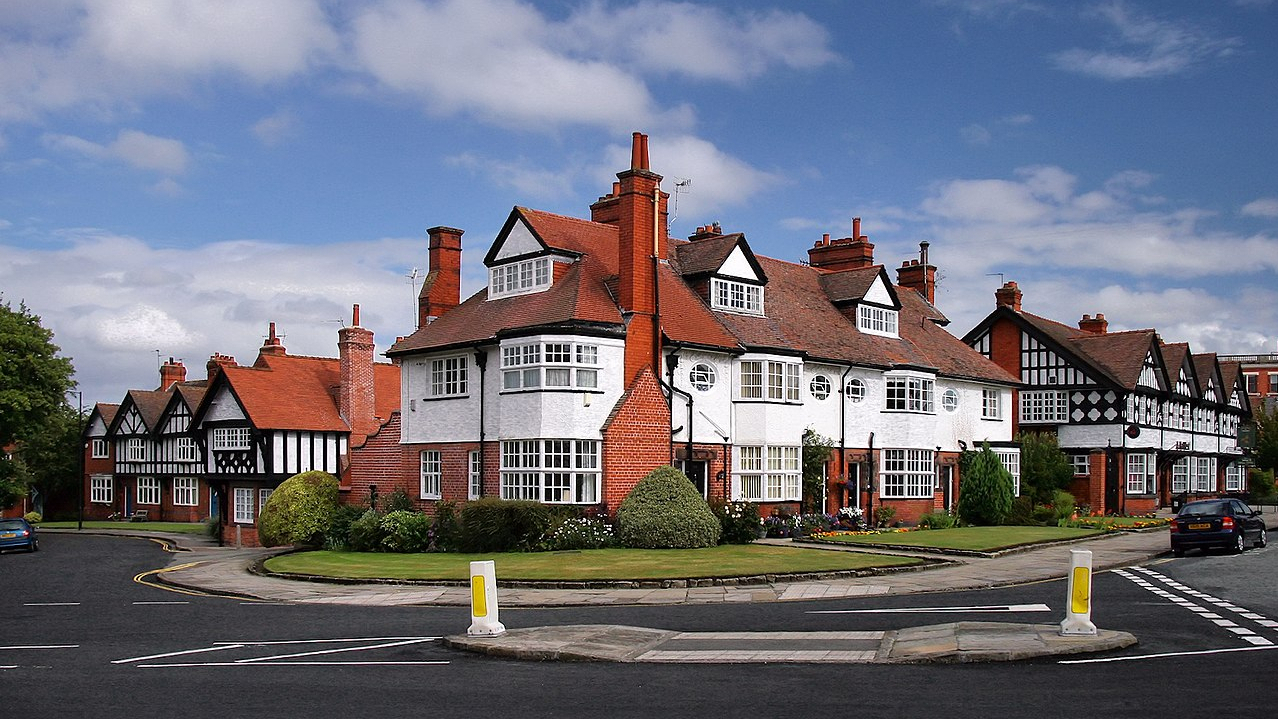 Port Sunlight was a major influence on the Garden City Movement. It was built by the Lever Brothers to accommodate workers of its soap factory. The name is derived from Sunlight, the most popular brand of cleaning agent from the factory. 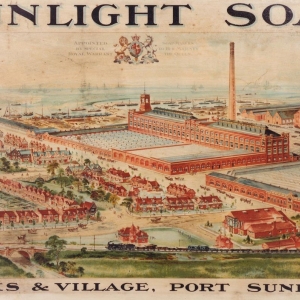 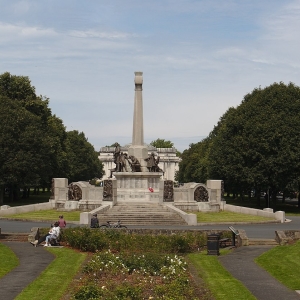 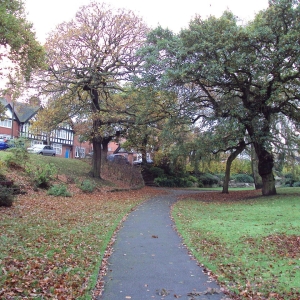 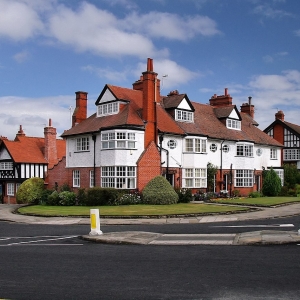 William Hesketh Lever, 1st Viscount Leverhulme (1851-1925) was an English industrialist, philanthropist, and politician. Together with his brother James he established Lever Brothers, which was one of the first companies to manufacture soap from vegetable oils. It is now part of the British multinational Unilever.

In 1887, William Lever bought 56 acres (23 ha) on the western side of the River Mersey. The site became known as Port Sunlight and not only housed a new factory, but a model industrial village to house his employees as well.

Lever had a social conscience and wanted to improve the lives of ordinary men and their families. His aim was "to socialise and Christianise business relations and get back to that close family brotherhood that existed in the good old days of hand labour."

Lever developed a system called ‘Prosperity Sharing", whereby profits of the company were invested back into the village. This involved providing the workers and their families with sanitary housing, green open space, allotments, sports facilities, access to healthcare and education and opportunities for wholesome leisure activities. With this, it was a major influence on future garden cities. 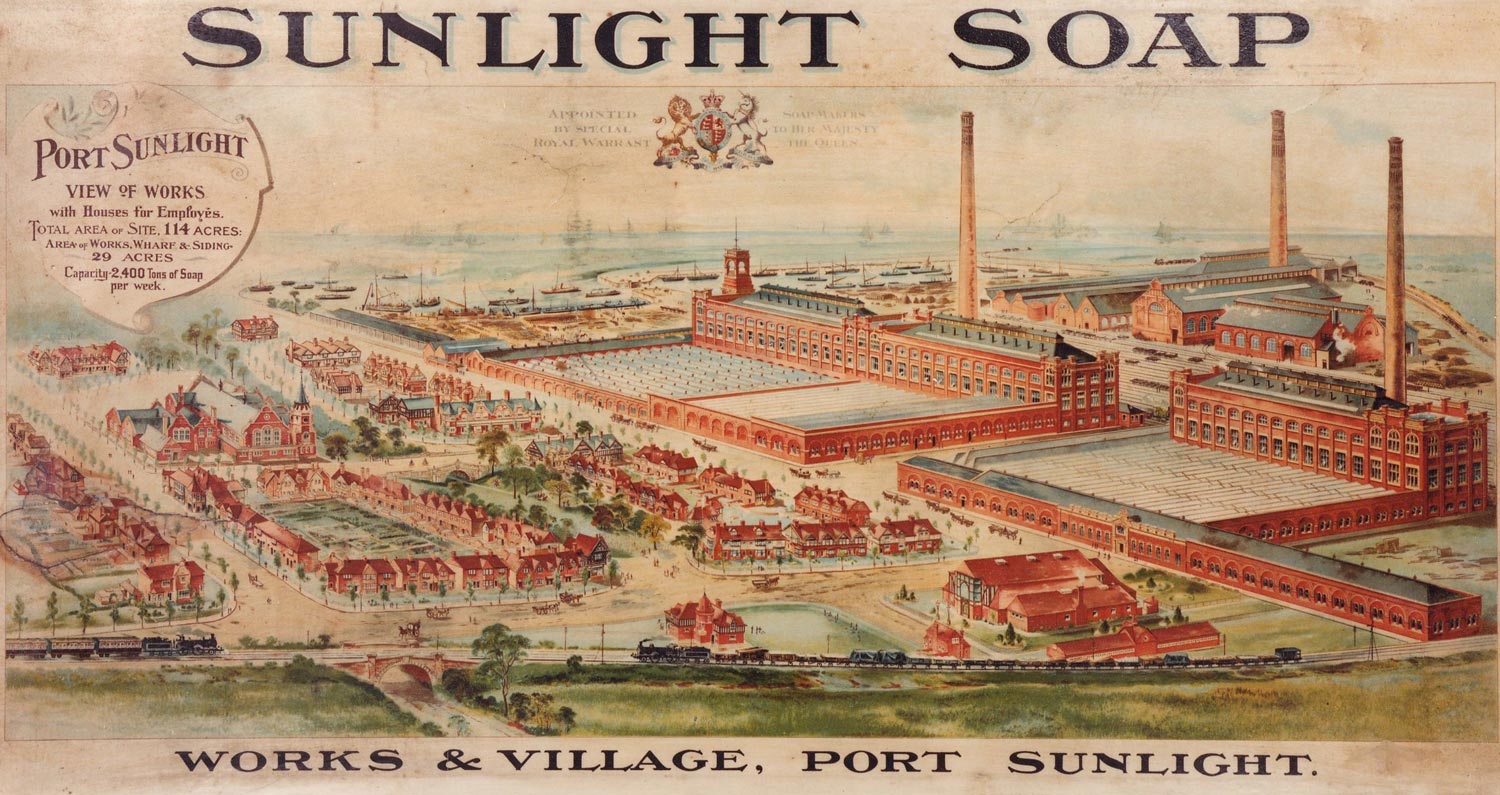 William Lever - who once had ambitions to become an architect, but entered the family business on his father's instance at age 16 - personally supervised the planning of the village. He also was involved in all the designs, vetting every one of them himself. The building of the factory started in 1888 with the help of William Owen, who also designed the earliest houses. Between 1899 and 1914 800 houses were built to house a population of 3,500. The houses were built in blocks and each block of houses was designed by a different architect.

Each block was surrounded by green space, and each family was provided with an allotment for growing their own food. The houses - whose backs can not be seen - were set in parkland.

The garden village also had many public buildings, including the Lady Lever Art Gallery (which opened in 1922), a cottage hospital, schools, a concert hall, open air swimming pool, church, and a temperance hotel.

In terms of architectural features, the houses were built in brick, stone, and half-timbering, and incorporated features from many architectural styles, including medieval, Jacobean, and Queen Anne, with English, French, Dutch, and Flemish influences.

Life in Port Sunlight included intrusive rules and implied mandatory participation in activities. The tied cottages meant that a worker losing his or her job could be almost simultaneously evicted. workers'. Social lives were policed from the head office, and some of the employees clearly resented the paternalism. However well intentioned, the power it afforded the company, even though it was rarely exercised, was viewed as an attack on workers' liberty and human rights.

Up until the 1980s, all residents were employees of Unilever (which still has its registered office at Port Sunlight) and their families. During this decade the houses were first sold privately.